I hope this Monday finds you safe and dry. With an eye on Hurricane Irma and early tracking predictions having her heading toward the Carolinas, I spent part of Saturday removing watering cans around the Potting Shed and securing anything that would be a potential projectile with high winds predicted.

We dodged a bullet when Irma changed course, but it looks like parts of Alabama, Georgia and Tennessee won’t be so lucky. We were in Charlotte in 1989 when Hurricane Hugo made landfall at Charleston, South Carolina as a Category 4 storm. It was downgraded to a tropical storm by the time it made its way inland to Charlotte, leaving us without power for a week, and some for as long as two weeks, with downed power lines from trees and high winds. My heart goes out to those in Florida in the path of Irma and those in Texas who are recovering from the aftermath of Harvey.

We had our bags pack to head to Savannah this past week for a little getaway for a few days. We cancelled our trip when Irma became a threat and Georgia declared a state of emergency, adding gas shortages and traffic problematic for those evacuating Florida.

We had a little ‘stay-cation’ instead, boating and enjoying some beautiful weather with temperatures in the 70s, and a calm and serene lake with the weekend boaters gone home after Labor Day.

I spent some time puttering around the Potting Shed doing a little clean up this past week, feeling the nip in the air and ready for fall. I’m anxiously waiting for pumpkins to arrive in the garden centers and for leaf peeping weather which usually is the end of October for us.

I found a pair sconces at a favorite antique mall several weeks ago. I hung them on my decorative shutters framing my window.

I loved the flowers on the sconces and thought the black finish would complement the tole trays, adding some additional blooms. Instead of a candle, I added terra cotta pots to sit on the sconces, with the hole of pot resting on the candle nail. Roses from the grocery store add some welcome flower therapy, filling the tole cachepot. . .

. . .adding blooms for mason jars with greenery snipped from the shrubs. . .

. . .and filling a little creamer.

I was thrilled to find a tole painted on watering can on Etsy several months ago.

And a pair of vintage black scales work as bookends on my shelf.

The plate and creamer are Robert Sprays by Wedgwood, you can find them at the table, HERE.

I’m watching the hurricane coverage and seeing the destruction this morning in Florida and keeping those in the path of the storm in our thoughts and prayers.

On a lighter note, this is the only Irma and Harvey you’d want to meet. Harvey and Irma Schluter have been married for 75 years! He turned 104 in July; she will be 93 in November. Read more, here. 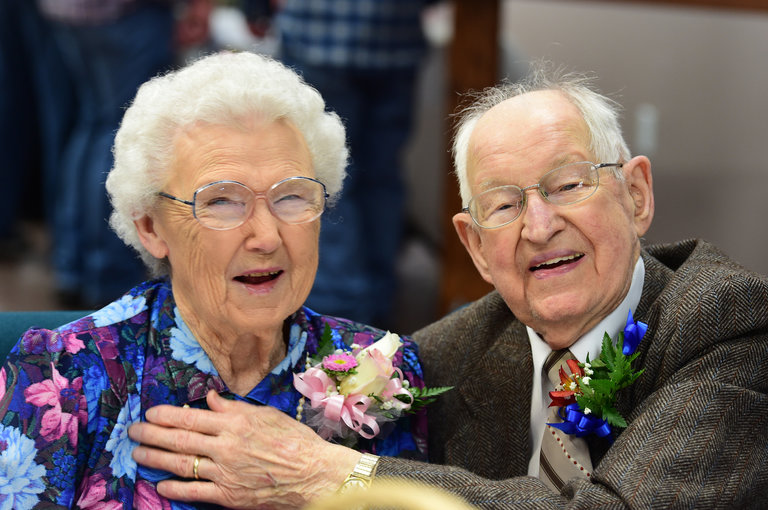 Gusty winds and rain tonight are in our forecast through Tuesday, but no potential flooding.

If you’re in the path of the storm, stay safe! ♥

‘Black and White with Bunnies All Over’ Easter Table